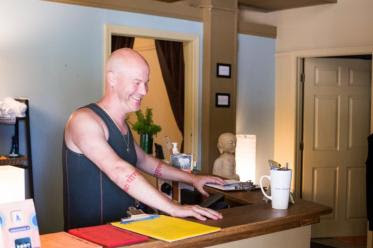 as a way to deal with chronic tightness.  After years as a runner, he was in search of something — anything — to sort that physicality out and with a yoga studio only a few blocks from his office job, he started going.  “The first class I went to was the hardest thing I’d ever done in my life.  So I was hooked,” he said.  “I’d also had a friend in grad school die very suddenly from an aggressive cancer, which for me was a wake-up call to pay more attention to my body.”
Teaching came down the line a few years later in January 2003 when the instructor from a regular class he attended at a gym called Club Fitness decided to step down and asked him to take over for her.   “I was already going to workshops and trainings. There wasn’t any kind of formal teacher training certificate system back then. Most everyone I knew just took over from some other teacher,” Elliott said.  He’d already discovered Somerville O2 by this time — he also claims to be the first student who ever walked in the door [Mimi– fact check us on this one] and started teaching and assisting at what would come to be his home studio in May 2003.  “I got interested in O2 because the classes were smaller, more interesting, and with more hands-on feedback. It was the first place I ever got corrected in chaturanga,” he explained.
The rest, as they say, is history. 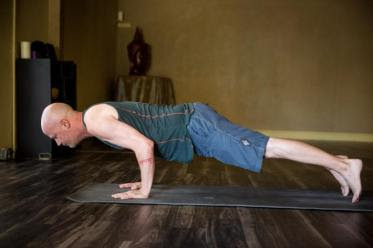 When he’s not working on his sourdough bread baking (or his latest project:  The Perfect Biscuit), Elliott is teaching yoga full time.  He’s the manager of our Somerville studio as well as one of our senior teachers involved in leading our annual 200-Hour Teacher Training Program.  He teaches yoga at Tufts as well and does a marvelous job at instilling those undergrads with the pure love of the practice, as many of his university students make their way over to O2 — many of those students going on to do workstudy or participate in our Teacher Training or even become O2 Teachers!  We sometimes joke about “The Cult of Elliott” around the studio since he’s beloved by so many.  Attend one of his classes and you’ll easily understand why.
What Elliott Has Learned from Mimi:
“Sometimes the most compassionate thing is just to let people have their own practice.”
What Elliott Has Learned from Teaching:
“Students put everything they have  – good and bad – out on their yoga mat.”
What Elliott Has Learned from Another O2 Teacher:
“I took class with Katherine [Nelson] years ago and I had noticed something had changed in her approach. I asked her about it and she told me ‘I’m working on shutting up more.’  I’ve taken that to heart.”
Elliott’s Favorite Pose:
“I could handstand all day!  Please.”
Elliott’s Favorite Pose to Teach:
“I love to teach headstand. Students are so overjoyed the first time they get headstand.”
Many students have asked us lately about which of our teachers play music, so we asked Elliott for his thoughts:
“I don’t play music in class.  In my early training in astanga, the only sound should be your breath. I also teach at a university where I see undergrads who are so distracted by their devices and any/every form of media that I’m trying to provide a space that’s deliberately under stimulating. My early experiences in yoga were at a huge studio where the teachers had curated playlists synchronized to the practice and it all seemed very glamorous and cool, until I started to see the emotional effect of the music was being used to paper over otherwise mediocre teaching.  I want my teaching to stand on its own, without the crutch of music.  I’ve had enough students in class with hearing loss or disability who literally can’t hear me if there’s music on.”
Other fun facts about Elliott:
He used to be a Gemini but now he’s a Taurus; he loves to quote 30 Rock; and he has the biggest, cutest, furriest Alaskan Malamute in the world — his name is Rex and he will howl for you.
For info about our entire amazing teaching staff, click here.